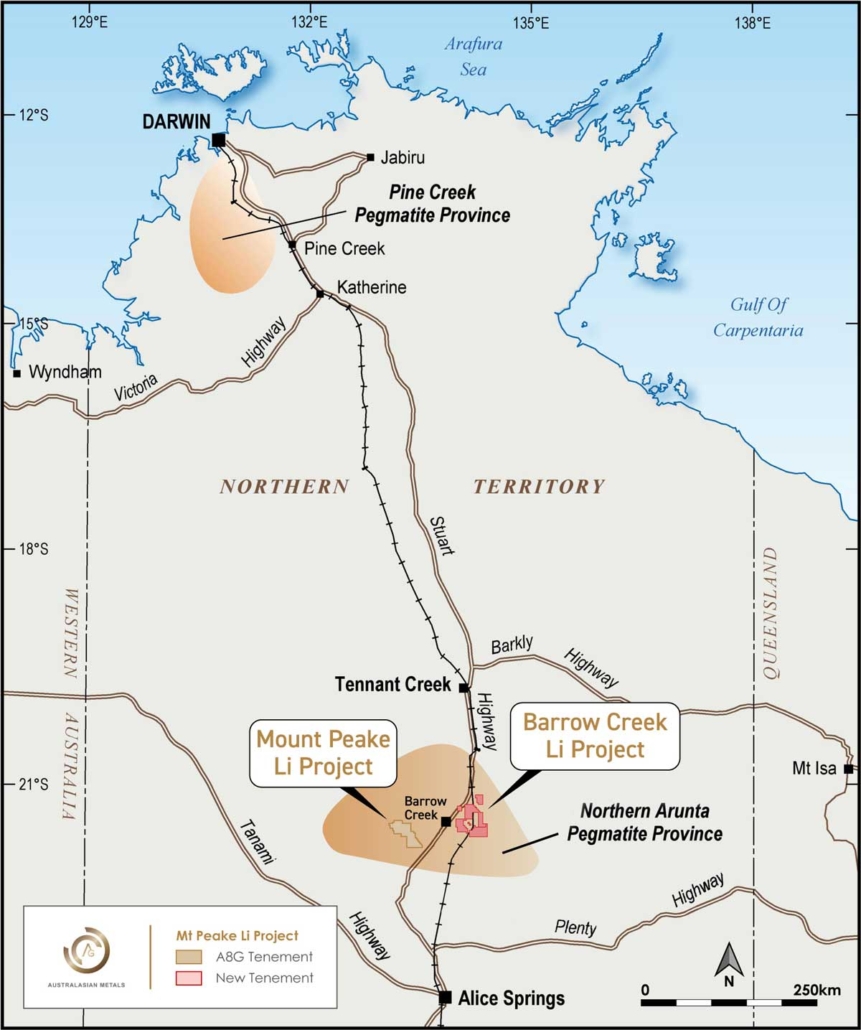 The location of the tenements is presented in Figure 1. They are located roughly 100 kms to the northeast of the Company’s Mt Peake Lithium project (ELA32830). Importantly, the tenements are situated on privately-owned land, with good road and railway access. There are historical Ta-Sn mineral occurrence records across several tenements, and pegmatite rocks have been mapped, with regional geological mapping by previous explorers and government geologists (Bagas and Haines, 1990, Frater 2005, Donnellan 2013, Scrimgeour, 2013, Figure 2).

The known tin-tantalum and lithium pegmatite fields in the Northern Territory (NT) are on the exposed western and southwestern margins of the Pine Creek Orogen and northern margin of the Arunta Region. Their location along craton margins is typical of Proterozoic terranes; the granitic hosts are typically late- or post-tectonic and are associated with pre-existing granite contacts along deep regional faults. The most important producing area is the Bynoe pegmatite field in the Litchfield pegmatite belt of northern NT. Other producing areas in the Northern Territory include the Shoobridge field in the southwest of the Pine Creek Orogen, and the Barrow Creek and Anningie/Napperby fields in the northern Arunta.

The Arunta Region, including the Prodigy Gold tenements, is a large portion of a multi-deformed and variably metamorphosed terrane along the southern margin of the North Australian Craton (NAC) with variable deformation, episodes of multiple magmatic activity and metamorphic overprint. Magmatic activity in the Palaeoproterozoic was extensive and in some areas, repetitive. Both syn- and post-magmatic activity resulted in pulses of felsic and mafic magmatism that extended over long periods. During various periods in the Palaeoproterozoic, emplacement of deep seated granite, multiple deformation, volcanism and sedimentation commonly occurred in different areas of the Arunta Region.

The Lander Rock beds, Bullion Schist, Ooradidgee Group and Killi Killi Formation were deformed and metamorphosed during the Stafford-Murchison Event (1810–1790 Ma). This is a period of extensive granite magmatism in the central to southern NAP, with emplacement of the syn-tectonic Murchison Suite (Ooralingie and Bean Tree granites, and parts of the Barrow Creek and Ali-Curung granite complexes) and equivalents (Boothby Orthogneiss, Harveston Granite, Anmatjira Orthogneiss, and Stafford and Esther granites). The ‘S’-type Barrow Creek Granite Complex and Esther Granite are considered to the source of the Barrow Creek and Anningie/Napperby pegmatite fields.

The mineralised pegmatites in the region typically form as linear swarms and range in size from a few metres long and less than a metre wide up to hundreds of metres long and tens of metres wide. Their shape is typically tabular or pod-like and their orientation is steep to sub-horizontal. Although the pegmatites are commonly parallel to the regional fabric, in detail, they transgress both bedding and foliation. Structural evidence suggests that the pegmatites are late- to post-tectonic, with emplacement being relatively passive. A highly variable and frequently non-penetrative brittle-ductile style of deformation is evident, with zones of well-developed brittle-ductile deformation commonly bounding windows of undeformed or mildly deformed pegmatite.

The bulk mineralogy of surface pegmatites is typically quartz, muscovite, kaolinite, cassiterite, tantalite and columbite. Most of the pegmatites display some degree of zoning; in most this consists of a narrow border zone, of fine-grained quartz and muscovite, adjacent to a wall zone, which consists of comb-textured quartz and muscovite oriented perpendicular to the wall of the pegmatite. The wall zone passes into a feldspar-dominant intermediate zone. A core zone of massive quartz may be present in larger bodies, although rarely as a symmetrical central core. Narrow, steeply dipping zones of greisen and veins bearing cassiterite and tantalite are a common feature of mineralised pegmatites. Tourmaline and garnets are relatively rare in the pegmatites, but tourmaline is very common in the country rock at the pegmatite contact. Tourmaline saturation at the contact is interpreted as being due to the escape of volatiles from the pegmatite walls. Geochemical analyses indicate that boron and fluorine are typically removed from pegmatite and are dispersed in country rock adjacent to the contact.

The tenements are interpreted to include blocks of sedimentary rocks; mainly Lower Hatches Group and Flynn Subgroup sandstones and the Arumbera Sandstone, sandstones, limestones and siltstones; blocks of metamorphosed Lander Rock beds composed of greywackes, siltstones, shales, schists and gneiss; intruded by granites. Balfour (1978) states that in 1944 some 0.1t of tantalite concentrate was extracted from a pegmatite in the surface and eluvials located 2 miles south of Neutral Junction station. Coarse grained muscovite flakes are arranged perpendicular to the vein wall. 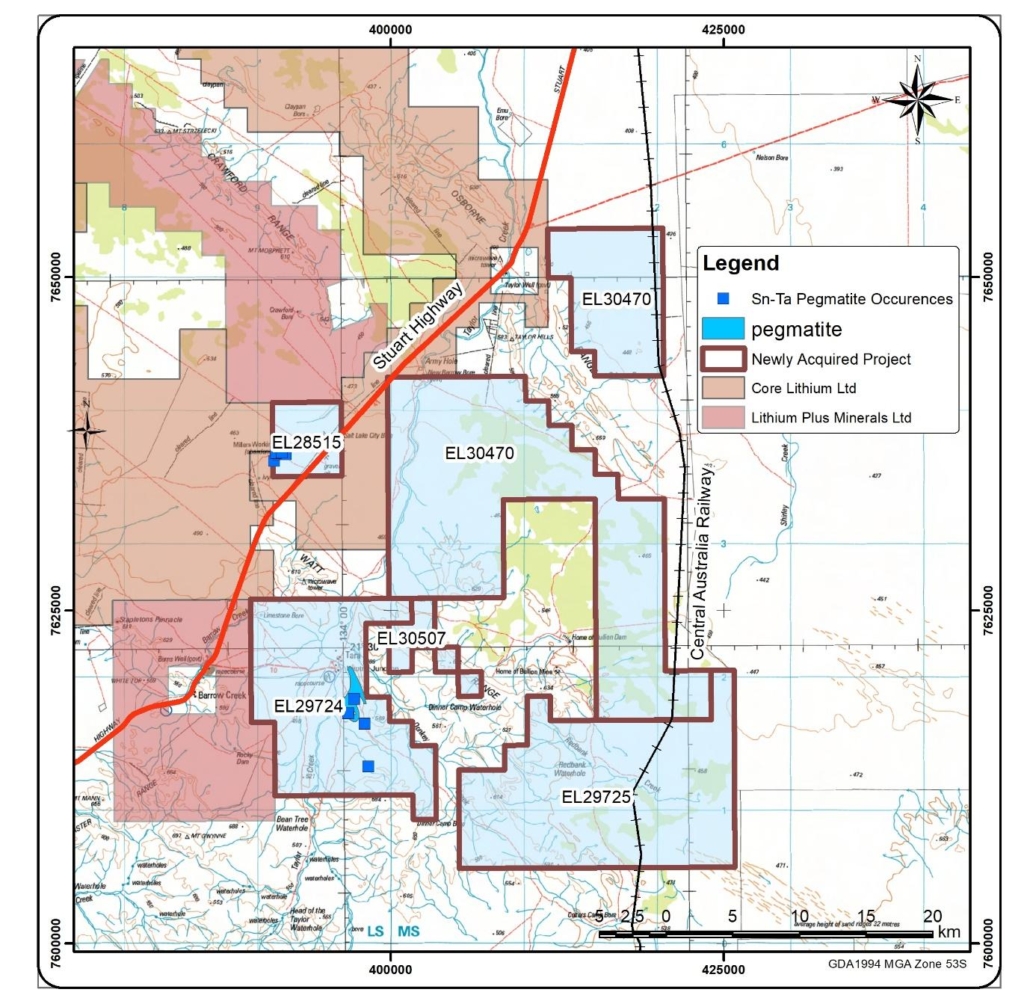 Figure 2: Layout of the newly acquired tenements. The package share boundary with Core Lithium Limited and another lithium exploer (Lithium Plus Minerals Ltd). Pegmatite is mapped with 1:250K geological map and Sn-Ta pegmatite occurrences have been reported.  Their packages have great access to Struat Highway and Central Australia Railway

north and then using the Ali Curung to Jarra Jarra track. Newmont constructed an access track from the Jarra Jarra to the Waldron’s Hill prospect In 2007. In 2008 Newmont constructed a series of north-south access tracks off the Waldron’s Hill track to allow better access to the region. Reliable fair-weather access to most of the individual sites is via a series of established pastoral and historical exploration gravel tracks.

Completion of the acquisition is expected to occur in the coming weeks.

The SPA contains warranties that are typical for an agreement of this nature.