The Fairview gold project, application for tenement E 08/3248 (Figure 17), is located on Wyloo cattle station within the Pilbara district of Western Australia approximately 200 km by road south-east of the nearest regional town at Onslow and approximately 345 km by road from the major port at Karratha (Figure 18).

The Fairview tenement application is accessible by gravel station tracks leading off the nearby bitumen Nanutarra-Paraburdoo Road.  Access is possible all year except after occasional summer tropical storms when roads may be blocked due to flooding for short periods. 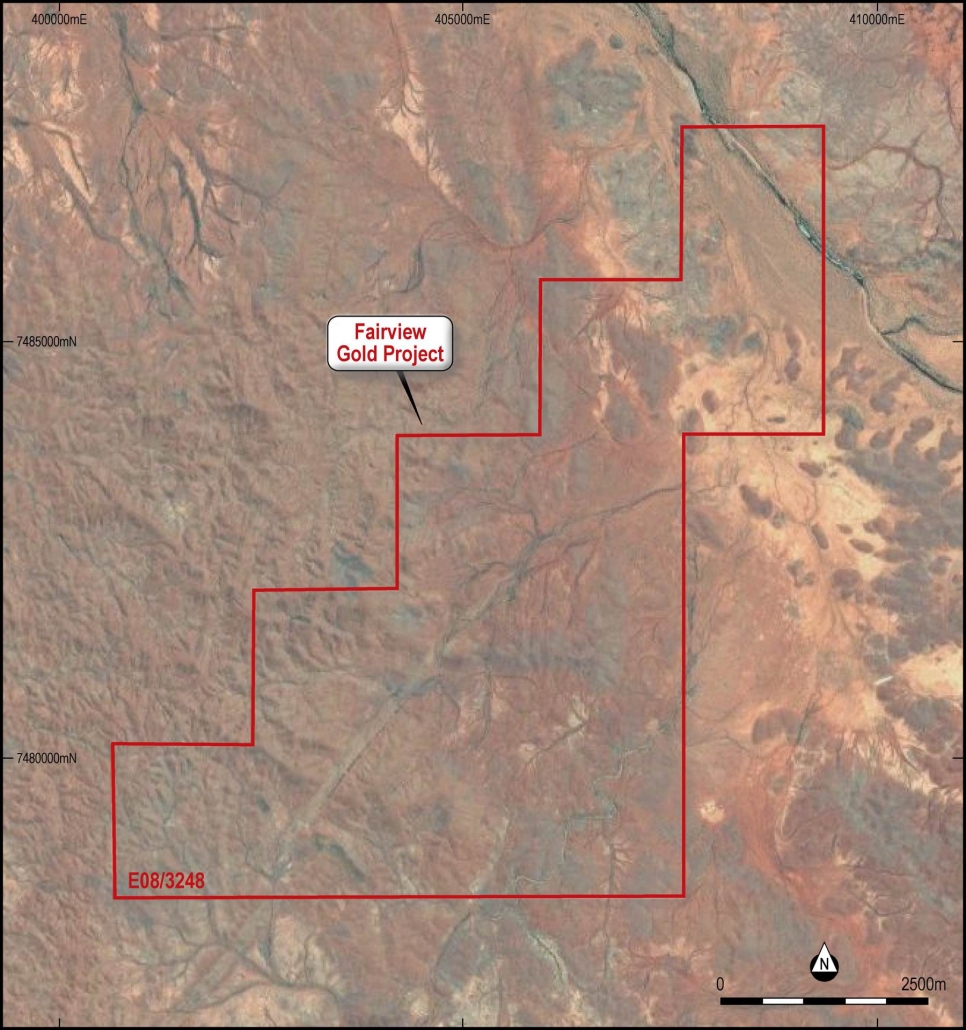 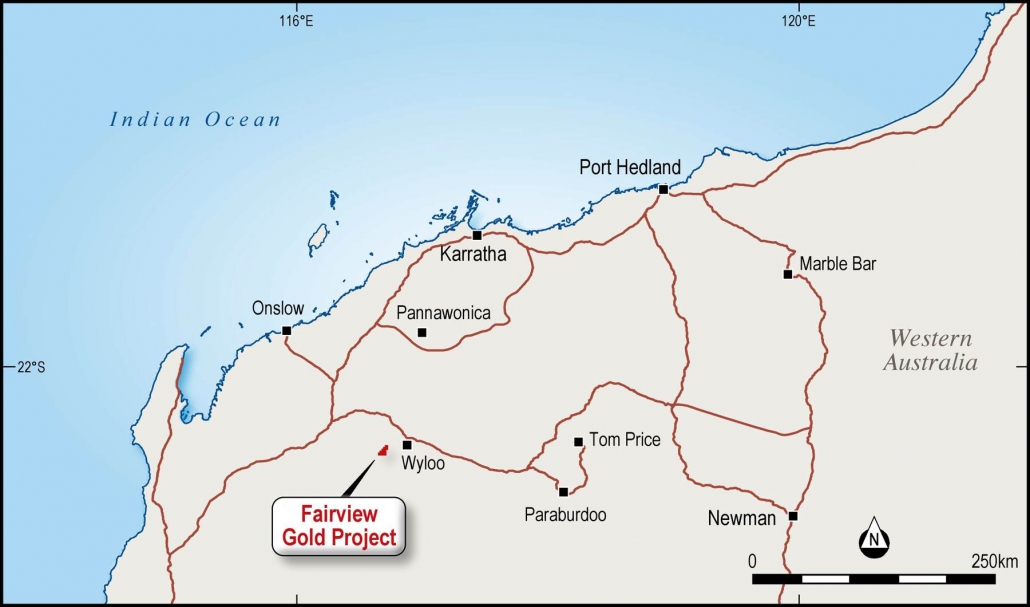 The Wyloo region that includes the project area comprises a landscape of prominent hills, incised valleys and plains. The climate is semi-arid, similar to Newman to the east, with very hot summers and mild winters. The temperature reaches or exceeds 38 °C for many days in the summer.

Precipitation is sparse, but the influx of monsoonal moisture in the summer, which generally begins in December and lasts until April, raises humidity levels and can cause occasional heavy storms. Winter months are mild to warm, with daily high temperatures ranging from the 20 °C  to 26 °C, and low (night time) temperatures rarely dipping below 6 °C.

The oldest rocks on the Wyloo 1:250,000 scale geology map are exposed in the core of the Wyloo Dome (Figure 19). These are a metamorphosed sequence of mafic volcanics, dolerite, gabbro, and minor chert that have been intruded by the Metawandy Granite. These basement rocks are generally schistose and in part unconformably overlain by rocks of the Wyloo Group which underlay the Fairview tenement. 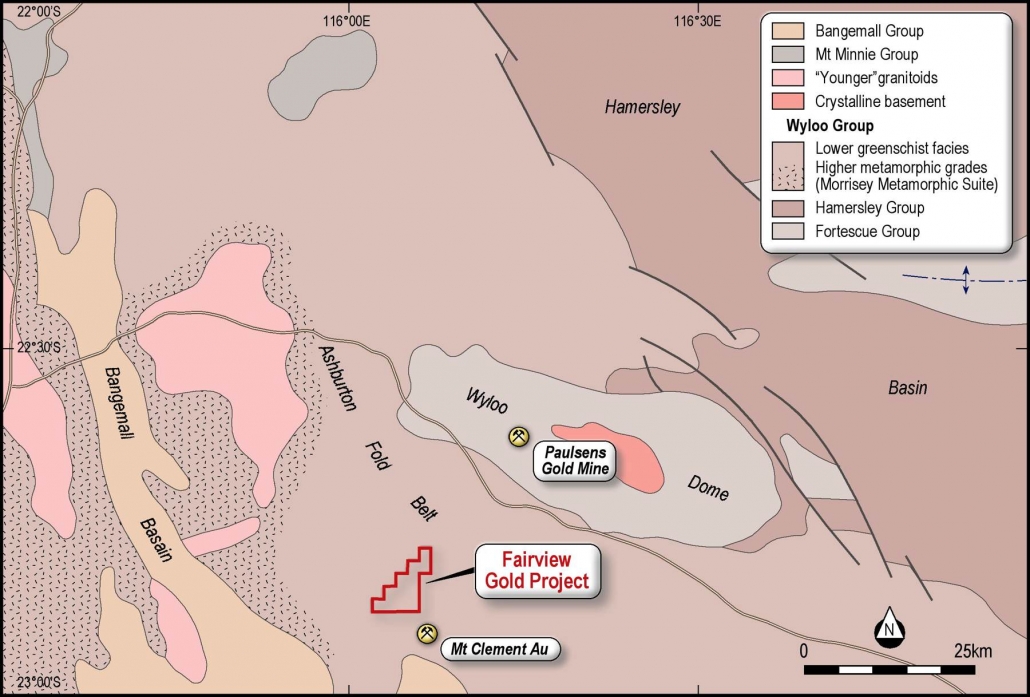 The majority of the Fairview tenement application is composed of sediments from the Upper Wyloo Group called the Ashburton Formation, a sequence of submarine-fan and associated basin-plain sediments that are composed of conglomerates, wackes, mudstones, ferruginous mudstones with minor cherts.  A small patch of older Duck Creek Dolomites outcrops in the northern end of the tenement.  These units both host gold and base metal deposits throughout the district including the nearby Paulsens Gold Mine and Mt Clemment gold, silver and antinomy deposits.

A northwest-southeast striking narrow dolerite dyke cuts across the axis of the tenement following a shear zone that previous explorers have determined to host anomalous gold and base metal mineralisation. 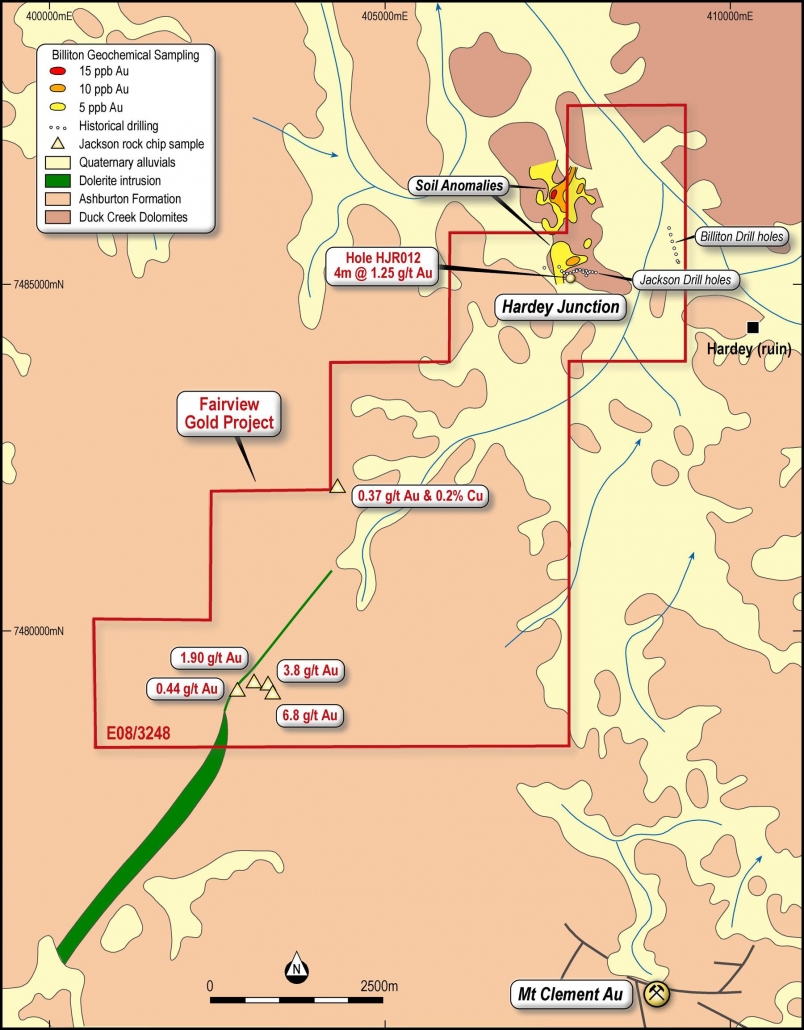 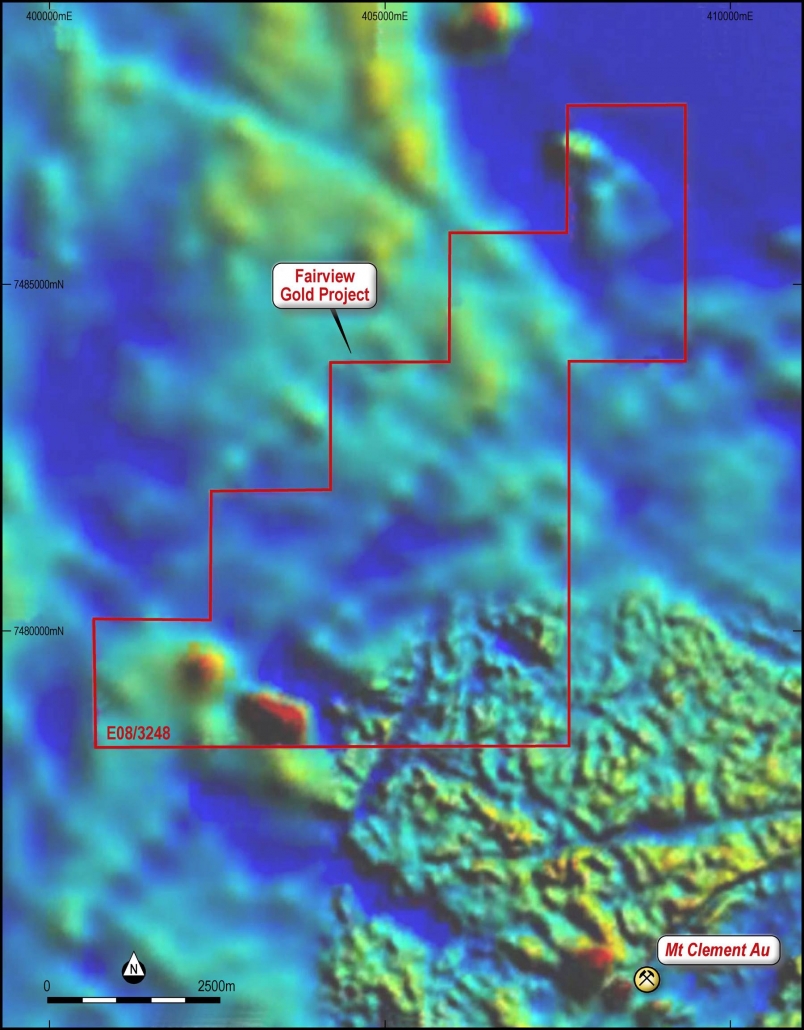 The main prospect at Mount Clement lies within a lens of oxidized and silicified siliciclastic and chemical rocks which are generally conformably confined within the Ashburton Formation. The Main prospect is interpreted as a sediment-hosted, deep-marine, hot-spring deposit. The Eastern prospect at Mount Clement is a sulphide bearing fracture filling formed as a result of dextral wrenching after the deposition of the Ashburton Formation. It is characterised by anomalous levels of silver, arsenic and gold which may have been derived, in part by leaching of wall rocks.

The Northern Star Resources Ltd (ASX: NST) Paulsens Gold Mine with mothballed plant is approximately 30 km to the northeast of Fairview and located in the Fortescue Group sediments within the Lower Wyloo Group (Figure 19).

The following are selected notes on past exploration sourced from the Geological Survey of Western Australia (GSWA) WAMEX website:

Noranda’s Mount Clement Project gold/copper-lead-zinc exploration covered a much larger area than the Fairview EL application but included much of the southern portion of the Fairview tenement application.

Noranda conducted an investigation between 1977 and 1979 into the potential for gold and base metals within the Lower Proterozoic shale, dolomite and banded iron formation. Geochemical and geophysical results indicated a zone of weak base metal sulphide. Approximately 150 stream sediment and channel chip samples were taken. Six of chip samples within the Fairview tenement application produced anomalous gold results with three above 1.0 g/t Au; i.e. 6.8, 3.8 and 1.9 g/t Au (Figure 20).  This sampling was carried out prior to JORC Code (2012) reporting of exploration results and so these results are provided as an indicative guide only as they cannot be independently verified. This mapping was done using a local grid and distorted aerial photos so the actual locations of the drilling and mapping are only approximate and will need to be checked in the field.

Aberfoyle Resource’s Yandi Well Gold Project also covered a much larger area than the Fairview EL application but included much of the Fairview tenement application. Reconnaissance exploration for gold was concentrated immediately west of the Mount Clement deposit within the Ashburton Formation arenites and pelites between 1991 and 1992.

A total of 74 stream sediment samples were collected producing a weak 1.2 ppb Au anomaly which was not followed up. Approximately 9 rock chip samples were also taken with one rock chip from an altered and gossanous quartz vein contained 0.1% As.

A total of 35 RC holes were drilled for 1,540 m to test trench anomalies (>0.1g/t Au over 2m) on their Woolshed grid and a 40 ppb Au soil anomaly on their Western grid. Of these holes 7 were within the Fairview tenement and were targeting intersecting lineaments (Figure 20). The only anomalous sample was 2 m @ 0.19 g/t Au in MCP31 but it is noted that only 3 (MCP30, MCP31 and MCP32) of the 7 holes  were effective and penetrated the surficial Quaternary alluvials to reach the target bedrock below leaving the target not properly tested.

Exploration by Adelaide included only the northern half of the Australasian tenement application and comprised compiling and interpretation of all available historical geological, geochemical and geophysical data sets.

Their JV partner Goldfields Exploration Pty Ltd proposed an RC drilling program but the full program was not completed. Following Goldfields’ withdrawal, survey work, drill hole re-logging and further prospecting was subsequently completed by Adelaide Prospecting.  During the 2000-2001 they reported on their rock chip and soil sampling and drilling.

Their mapping within Australasia’s E08/3248 included a number of outcrops with galena (indicating lead mineralisation) and gossans (indicating weathered sulphide mineralisation) and vertical RAB hole HJR012 produced 4m @ 1.25 g/t Au at 18-22 m depth (Figure 20).  This mapping was done using a local grid and distorted aerial photos so the actual locations of the drilling and mapping are only approximate and will need to be checked in the field.

Exploration by Jackson over their exploration licence comprised a review of historic exploration, a literature review, rock chip sampling and processing of airborne geophysical data.  During the 2007-2008 Jackson collected seven rock-chip samples within the Fairview tenement with peak results of 0.37 ppm Au and 1890 ppm Cu (Figure 20).

The main exploration focus at Fairview will be along the deep northeast striking structure along which a dolerite intruded that passes through the extent of the Fairview tenement application.  This feature is visible as a magnetic low in the regional aeromagnetics (Figure 21).

Of special note are the two magnetic high nodes at the southern end of the tenement application, either side of the dolerite.  The eastern node is in the vicinity of the anomalous Noranda rock chips (Figure 20).  Despite these anomalous samples, this area has not been drilled to date.

Australasian believe that the Billiton soil sampling anomalies and Adelaide’s mapping of galena and gossans in outcrops at the northern end of the Fairview tenement application have not been properly tested by the previous explorers providing immediate exploration targets for Australasian.